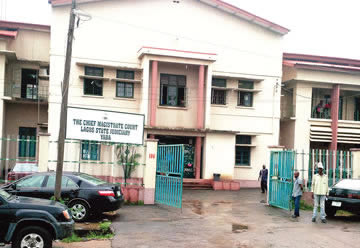 Three men were on Wednesday brought before a Yaba Chief Magistrates’ Court, Lagos, over alleged possession of two human skulls.

The defendants, Olanrewaju, 27; Kazeem, 38; and Muritala Salami, 43, are facing a two-count charge of conspiracy and unlawful possession of human parts.

They, however, pleaded not guilty to the charge.

The Prosecutor, Sgt. Modupe Olaluwoye, told the court that the defendants committed the offences at 6.00 pm on November 21, 2019, along Adeniji Adele Road, Lagos.

She told the court that the second and third defendants were caught in possession of two human skulls in a black nylon, which they had earlier claimed contained biscuits.

Olaluwoye said the two defendants later confessed to having purchased the skulls from the first defendant, Olanrewaju, who was a cemetery worker.

She said the alleged offences contravened Sections 411 and 238 of the Criminal Law of Lagos State, 2015 (Revised).

The News Agency of Nigeria reports that Section 238 stipulates a 14-year jail term for unlawful possession of human part, while 411 provides for two years imprisonment for conspiracy.

The Magistrate, Mrs S.O. Obasa, granted the defendants bail in the sum of N1 million each, with two sureties in like sum.

She said one of each sureties must be a blood relation to each defendant, and that both sureties should be gainfully employed.

Obasa also directed that the sureties should reside within the court’s jurisdiction, and show evidence of three years’ tax payment to the Lagos State Government.

The case was adjourned until January 20, for mention.