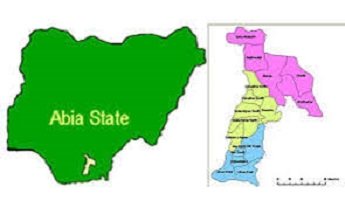 Though information surrounding his death is still sketchy at the time of filing the report, reports have it that Ogba reportedly died in Umuahia, the state capital on Wednesday.

Reports have it that the staffers of the agency were in shock when the news broke.

But Abia State Governor, Okezie Ikpeazu, in a release issued on Thursday by his Chief Press Secretary, Mr. Onyebuchi Ememanka said that the state government received the news of the death of the State Immigration Comptroller with profound grief.

According to the release, Ikpeazu stated that the useful and incisive contributions of the deceased during the State Security Committee which has gone a long way in assisting the State Government in managing issues around security of lives and property in the State would be greatly missed.

The State Chief Security Officer went further to describe late Ogba as an officer who carried out his duties in the state with utmost dedication and devotion.

“The state government received with profound grief, the news of the sudden death of the State Comptroller of the Nigeria Immigration Service, Mr. Banaebi Edward Ogba who passed on yesterday in Umuahia.

“The Governor expressed deep sadness at the demise of a man he referred to as “a gentleman officer” who carried out his duties with utmost dedication and devotion.

“Governor Ikpeazu recalls that as a member of the State Security Committee, the Late Comptroller made very useful and incisive contributions during the deliberations of the Committee which went a long way to assisting the State Government in managing issues around the security of lives and property in the State.

“The Governor sends his personal condolences and those of the Government and People of Abia State to the family of the Late Comptroller and the Abia State Command of the Nigeria Immigration Service, while praying God to accept his soul and comfort the family,” the release read.